You've heard that Cow Punchers are in demand out West since The Cows Came Home, which stands to reason. The Cows aren't gonna punch themselves, after all."
- In-game class description. 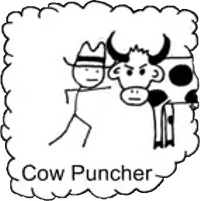 Cow Puncher is one of three possible character classes in West of Loathing. The Cow Puncher favors the Muscle stat, reducing its experience costs by half.