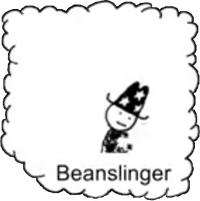 Beanslinger is one of three possible character classes in West of Loathing. This skill primarily focuses on the Mysticality skill and Spell Damage. In place of Hornswogglin' (Snake Oiler) and Intimidatin' (Cow Puncher) is "Outfoxin'" as the skill that opens up more color dialogue options in several places.